Email your MP - and ask them to protect health from coal! 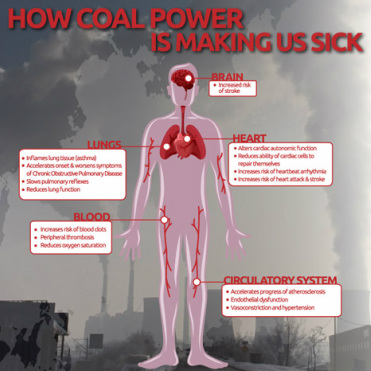 Image: Health and Environment Alliance
If you need to look up your MP's email address, you can find it by inserting either you postcode or name of MP or constituency at http://findyourmp.parliament.uk/.

There's a template text below which you can adapt as you see fit; the parts in italics are to edit yourself/entirely optional depending on your level of involvement with Healthy Planet, reasons for being concerned about this issue etc.  Please do let us know of any response you get!

(Good to start with a bit about yourself; though it's entirely up to you.)  I'm writing with regard to a vote in the House of Commons tomorrow, which is on an amendment to the Energy Bill that the House of Lords have voted for, which would set more stringent targets on greenhouse gas emission reductions for old coal power stations.  Closing this current loophole would be good news for both health and the climate, and this is why I am asking you to support the amendment.

I know that you must be very busy and apologise for the short notice, but I would appreciate it if you could let me know how you intend to vote.  If you are supportive of the amendment, it would be great if you could forward the attached briefing paper to some of your colleagues, and encourage them to vote in favour of the amendment.

The attached document is from the Health and Environment Alliance, and summarises the evidence regarding the direct health impacts of coal in the UK, and you may have seen some of the coverage this issue has received this week (such as this recent article).  The figures are shocking: 1600 premature deaths attributable to coal alone, along with over 360,000 working days lost annually, at an estimated total cost of £1.1-3.1 billion per year.

In addition to the substantial air pollution-associated health impacts of coal power, there are of course also climate impacts, the health impacts of which were recently highlighted at a Climate and Health Summit alongside the UN climate talks in Warsaw.  I am a member of the student group Healthy Planet UK, which is focused on climate change, sustainability and health, and these are two interconnected issues I feel strongly about.

As a public and global health advocate, and a young person who will be around when the climate impacts of our current energy policy decisions are being felt, I am asking you to back this amendment because I think these are two of the biggest health issues we face, and they can be tackled synergistically if our decision-makers are strategic and act on the evidence so as to prioritise people's health.  I look forward to hearing from you with how you intend to vote, and would be very happy to continue this discussion about the synergies between health and sustainable development more broadly, and what the ... Party could do to maximise those opportunities, at a meeting if you would have time for this.

Many thanks and best wishes,


Key facts:
Air pollution from coal-fired power stations in the UK is responsible for: