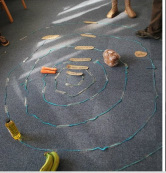 The food we choose to buy is probably the first or second most important decision we make in terms of our environmental impact (flying may be first but it depends on your lifestyle and diet) - and it's not all about where it's from, but also what it is.  Food is certainly the biggest environmental choice most of us make regularly and can change ourselves.


Agriculture accounts for between 17 and 32% of the world's carbon footprint directly and indirectly, and cutting back on red meat and dairy is by far the biggest thing most of us could do to reduce our 'foodprint' - the environmental impact of what we eat - and also improve our health in many cases, since most of us in the West have too much animal fat  in our diets.

Meat used to be a luxury for our ancestors but now it's seen as something to eat regularly, without much thought for the health or environmental consequences of high levels of meat consumption.  That doesn't mean we should all become vegetarian: better to do  something than nothing.  It could be a good reason to cut down a bit - especially on red/processed meat and high-fat dairy.

Why not  take the part-time carnivore pledge or give Meat-free Mondays a go?   We'd love to hear how you get on!

Other good articles and sites

The scientific background, for the extra keen...

In a paper  published in 2008, Weber and Matthews  calculate that for a US citizen, eliminating food miles entirely - almost impossible for most people - would be equivalent to driving 1000 miles fewer per  year.  Replacing red meat and dairy with chicken, fish, or eggs for  one day per  week would save the equivalent of driving 760 miles per  year  - and replacing  them with vegetables just one day a week would be equivalent to driving 1,160  fewer miles.

Land use and land use change accounts for approx. 35% of all GHG emissions since 1850 as well as much of the biodiversity lost due to habitat  destruction, and the expansion of cropland has been a major driving force in  that.  Meat consumption per capita is increasing around the world, especially in  emerging economies, from historically low levels.  Up to a point, this is a good  thing for global health - increases in the amount of livestock products consumed  can help to improve health, especially in countries where malnutrition, protein and mineral deficiencies affect many people.

However, well-balanced vegetarian diets can be healthy, and beyond a certain amount the  benefits are negligible and excessive consumption, especially of high fat types  of meat and dairy, is a contributor to obesity and many related diseases.  Also important is the fact that livestock, particularly intensively reared animals, require large amounts of crops and therefore of both land and water, which are becoming increasingly scarce.  The trend can push up the prices of  basic food commodities, which are already increasing due to climate-related events such as droughts and wildfires, and so reduce food security in poor regions.  Climate change, food security and health are closely and intricately  interlinked.


This September, a study by Louise Aston and co-researchers was published in BMJ Open, which modelled the  health impacts of a significant reduction in red and processed meat (RPM) consumption in the UK.  They split the meat eaters into five sections based on the amount of RPM they ate, and created a hypothetical scenario in which the number of vegetarians doubled  and the rest of the  population all adopted the same diets as the lowest 1/5th of the  meat-eaters.  They found that the predicted reduction in total greenhouse  gas emissions was 28 million tonnes, or 3% of the UK's total, and that the rates of coronary heart disease, diabetes  mellitus and colorectal cancer would decrease by between 3% and 12%.

Switching to a lower meat, lower carbon diet - like increasing levels of active travel - in the UK could also save lots of taxpayers' money, which is something we definitely need to do at present.  Macro-economic  analysis of a 30% decrease in saturated fat intake in the UK  through  reduced consumption of animal fat found that the healthcare cousts averted between now and 2030 would save approximately £5 billion in GDP: a pretty considerable sum!