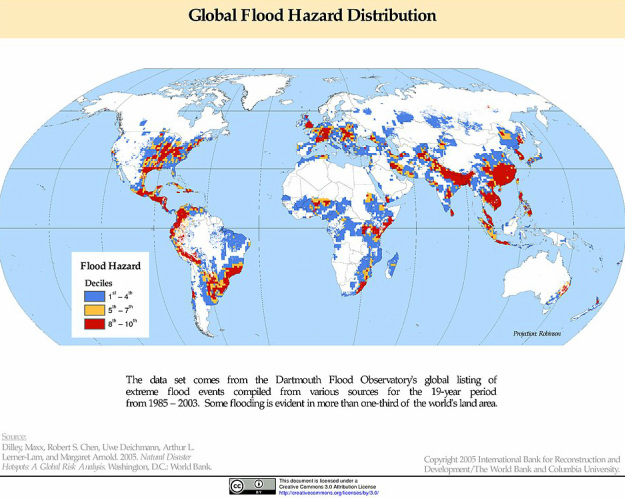 Flooding is a major environmental health hazard for a variety of reasons, and it's predicted to increase with climate change for two reasons: sea level rise (and, linked to this, the storm surges associated with an increase in extreme weather) and an increase in rainfall in many areas - largely because warmer air holds more moisture and the variation in rainfall appears to be increasing.  As the picture below shows, the risk of floodng isn't at all evenly distributed around the world. Th UK's quite vulnerable, although compared to many developing countries it is fortunate in having good emergency services, surveillance and health protection systems and policies in place.

This highlights one of the most important messages about climate change and health: that the impact is influenced greatly by the human and technical capacity to mitigate and respond to events like floods.  Which is part of why capacity-building and adaptation finance are central to an equitable global response to climate change.

Back in 2005 Mike Ahern and colleagues conducted a review of the published evidence on the health impacts of floods, and concluded that:
'the immediate risks of trauma and death are generally clear, but it seems that longer-term impacts, specifically on mental well-being, are often underestimated and probably receive too little attention from public health authorities'.

Infographic summarising projected increases in the risk of flooding in the UK:

We came across this great infographic on Confused.com, on how the risk of flooding in the UK is projected to change in future with climate change and increases in the UK population: