What's going on elsewhere among climate and health student groups?

The “Climate Health Initiative” deals with issues related to the relationship between climate change and health. Its goal is to raise awareness about the health effects of climate change, both among students and the public, and to take action against climate change.  It was formed in summer 2011 in the context of the standing committee on “Public Health and Development Cooperation”, but can be considered an independent initiative, which works across all BVMD's standing committees.

The initiative’s policy statement "Climate Change and Health” was voted in during the fall of 2011 and clarified BVMD’s position on sustainability for the first time ever. The organization committed itself to design its own events in a more sustainable way. As a result the sustainable use of resources, sustainable food procurement, low emission transport and accommodation of members have already been implemented at many bvmd meetings. The next goal is to implement an organizational bylaw on offsetting carbon dioxide emissions caused by flying to international meetings.

Active members of the initiative have participated in several of the UN climate negotiations, as a member the IFMSA’s delegation. For example, in Bonn (June 2011) and Durban (December 2011), the IFMSA used their position as global representation of medical students to draw the attention of policy makers on health issues, in order to influence the negotiations towards a more sustainable, healthy future for all. 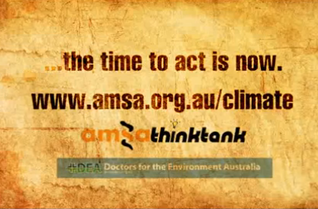 The Code Green campaign began through a partnership between Australian Medical Student Association (AMSA) Think Tank and Doctors for the Environment Australia (DEA).  Code Green aims to provide a platform from which medical students and doctors can educate, engage and inspire colleagues and the wider community to act now to prevent the worst health consequences of climate change.  In acting through Code Green, Australian medical students and doctors join an international community of health leaders taking action on climate change.  There are four key components of the campaign: Education, Health Systems, National Advocacy and International Advocacy.  At the national level, a separate committee manages each component simultaneously.

We can prevent much of the worst health effects of climate change by taking action to avoid what we cannot manage (mitigation – reducing greenhouse gas emissions) and manage what we cannot avoid (adaptation – preparing for changes that are already set in motion). Tackling climate change also creates immediate co-benefits for community health. For example, increased levels of active transport leads to reduced risk of obesity, diabetes, heart disease and mental illness, as well as reducing road traffic injuries and deaths and improving air quality. Given that protecting public health is the duty of health professionals in society, AMSA takes the firm stance that health professionals can, should, and must take meaningful action on climate change.

To find out more about how you can start working on Code Green and climate change action at your university contact the AGH’s Campaigns Officer at [email protected] or watch this video for more information.
Norwegian Medical Students' Klima=Helse group
https://www.facebook.com/klimahelse 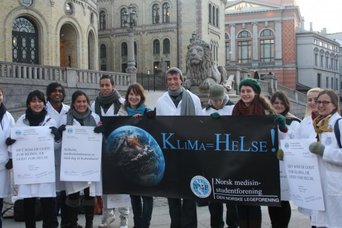 Klima = Helse (climate = health) is the group under the Norwegian Medical Association that works on climate, environment and how these affect people's lives and health.  It started as a national project in 2009 and today the group in Bergen are most active.

They work to raise awareness among medical students and health professionals, and organise activities to promote and inspire a more environmentally-friendly lifestyle.  Last year arranged Climate = Health seminar over one weekend for both medical students and the general public in Bergen.  They have helped to create a herb garden at Haukeland University Hospital in addition to holding a number of smaller events such as film screenings and stands.  In addition to local efforts, there is usually at least one representative from the NMF to the UN climate talks under the IFMSA delegation.

Before COP18, medical students from Malta and Rwanda joined some students from the UK
in making a short video about climate change and health (see below):