Why does it matter that medical, nursing and other healthcare students learn about climate, health & sustainable healthcare? 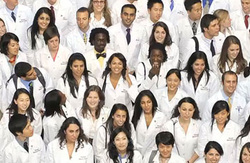 In spite of being widely recognised as very important for health1, climate change and sustainability are completely missing from many medical schools' curricula - whilst others such as Bristol, Leeds and UEA now have exciting and innovative courses on the relationship between the environment and health and encourage medical students to think about the solutions to global challenges such as climate change.

One explanation often cited for this omission is a lack of curriculum space, but incorporating these topics creatively and intelligently, so that they build on synergies with other topics taught, could bring immense longer-term benefits.  It would help to create a workforce ready for the challenges of the 21st century, as well as being interesting and important in its own right.

Moreover, doctors' actions and their views on political topics can be very influential in terms of public opinion.  They are one of the most trusted and respected professions, especially when it comes to threats to health, and they come into contact with the general public on a regular basis: for example, only when doctors themselves stopped smoking did public attitudes to smoking start to shift in the UK - until then scientific evidence had very little impact on people’s choices.


Some people involved in curriculum planning question whether students really want to learn about climate change and health, or even global health, or whether it’s just a small but vocal minority.   An informal online Global Health Survey of Cambridge students last year set out to try to find out if this was the case, with an edible prize offered in order to try to get responses from a range of people (rather than only global health enthusiasts!)   Of 224 respondents (of which 143 were medics), 30.8% said they were very interested in climate change and health, and 48.7% described themselves as fairly interested.

The more students that are calling for change in what we're taught and offered, and the better we communicate that to our course organisers, the greater the chance there is of securing a greater inclusion of global health more generally – and Climate Change and Health more specifically – in the curriculum.


If getting more teaching onto your medical school curriculum is something you'd like to try, get in touch with our education lead, Alice King or email [email protected].