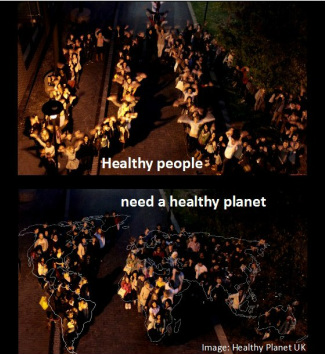 
Our objectives were:
-          to raise awareness of health impacts of climate change amongst negotiators, other parts of the civil society movement, and at home, and to use this as a driver for climate action.
-          to engage with other members of YouNGO and the NGO community and learn more about the international process,
-          to build up our UK and international networks for future collaboration, particularly through a Declaration and work to build the emerging Global Climate and Health Alliance.


We believe we were successful in most of these aims, and Jonny's trip helped to the groundwork for this year at COP19, building a number of good working relationships.  Jonny was closely involved in the recruitment and training of this year's delegation to COP19, and remains an active member of Healthy Planet UK.

What did we get up to in Doha?

This was one of the main aspects of our climate and health advocacy before and during COP18.   The Declaration’s main aim is to achieve the protection and promotion of health to be made the one of the central priorities of global and national policy responses to climate change –see http://dohadeclaration.weebly.com/ for the full text.   Jonny and others used this declaration as an advocacy tool in Doha, to promote the health message to stakeholders.   Over the course of COP18, and the weeks before it. we worked with a number of other organizations (CAHA, HEAL, C3, CHC etc.) to secure buy-in from a range of key stakeholders including the World Medical Association, International Council of Nurses, European Public Health Alliance and the Royal Colleges of Physicians and General Practitioners.

It also has over 80 organisations and 1250 individual signatories from all over the world on the associated change.org petition (accurate at 19/12/12).  To see the full list of signatories and endorsements here, and to sign it click here.

For the launch of the Declaration, the Healthy Planet UK and the IFMSA delegations, with help from the UKYCC team, organised a visual stunt (right) to raise awareness of the health impacts of climate change at the conference venue.  We achieved coverage from a range of media outlets and particularly focused on using social media alongside other members of the Alliance who were very helpful.

Jonny appeared on Qatar Foundation Radio's English show for a 30 minute slot; talking about some of the key impacts of climate change on health, global health diplomacy, thoughts about the summit and ways people and civil society can get involved.

Whilst in Doha, Jonny also organized meetings with a range of key stakeholders including: Mrs Mary Robinson (ex-President of Ireland), Dr Maria Neira, Director of Public Health and Environment at the WHO.  He also met negotiators from the UK and several developing countries, internationally renowned academics such as Dr Daniel Gomez from Mundo Sano, Argentina, as well as many youth delegates who attended the conference, helping to build up Healthy Planet UK’s network.
together with the IFMSA, Jonny organised a visual stunt at the conference venue on World Aids Day to raise awareness of the issue of discrimination of AIDS sufferers at the conference and drew links to the fact that climate change affects the most vulnerable populations globally, particularly people that already have chronic disease and need regular access to treatment and care.
COP18: background and outcomes

The conference was not an all-round success by any account but it saw a number of key agreements and we felt it was extremely worthwhile to have had a representative there.   Delegates from more than 194 nations reached accord on key steps to extend the Kyoto Protocol, move forward on negotiation of a new post-2020 climate treaty, and further the implementation of existing emissions limitation and financial pledges.

Whilst the collective impact of these decisions on reducing actual emissions to the atmosphere is minimal, far below what is needed, and the UN process was at times painfully slow, it isn’t all bad news.  Assuming – and it is a big assumption - that we can secure sufficient political commitment from key players such as the US, the EU and China,we now have a clear roadmap, dubbed the ‘Doha Climate Gateway,’ for an all-encompassing deal to be made at COP20 in 2015; most likely in Paris.

Building on work at Cancun and Durban in previous years, Doha has succeeded in transitioning away from the old narrative where only developed countries have the legal obligations to deal with carbon emissions – moving now to a system where all countries, regardless of their economic development status will sign up to a global agreement, which civil society groups insist must be ‘fair, ambitious and binding'.


The pathway towards agreements on loss and damage

The conference in Doha for the first time saw rich nations agreeing to compensate poor nations for losses due to climate change through a loss and damage framework, the details of which are still to be worked out at COP19 in Poland.  This was an enormously contentious and emotive issue given that real world climate impacts were front and center at the Doha conference, from the havoc wreaked by Hurricane Sandy from Haiti to Maine, to the devastation caused by Typhoon Bopha as it tore through the Philippines and the island nation of Palau killing over 1000 people.

The US fiercely opposed the measure, suggesting that the cost could be unlimited; however, President Obama has just asked Congress for $60bn for the effects of Hurricane Sandy so we could potentially be coming not only to a fiscal cliff but also to a ‘climate change fiscal cliff’ where the effects of climate change start to be seen, felt and perhaps most important, taken seriously, by policy makers in the richest countries.  The Philippines’ lead negotiator Yeb Sano took the lead advocating on this issue, consistently urging delegates to remind themselves of the human tragedy unfolding in his hometown whilst the deal was being struck.

Doha marks the first stop on a roadmap to a post-2020 climate regime and in this respect cannot be written off as a failure.  There was a tangible feel that this conference was not about the here and now, but rather about laying a smooth transition for a couple of years ahead.  In 2014 the UN Secretary General Ban Ki-Moon is due to host a world leaders summit; hopefully injecting much-needed political and social capital needed for the 2015 UN summit.  Ban Ki-Moon is a strong advocate on this issue at the very top of the UN, but although his sentiments generally have verbal support from most developed countries and certainly the developing ones, there is as yet little real commitment.

In a time of austerity and economic uncertainty, many politicians, exemplified by the UK’s current policy moves such as fracking, appear to be focusing only on the next four years.  All signs point to the need for momentous action, yet ministers are failing to produce results on mitigation – and voters failing to pay attention - commensurate with the problem.

We felt that the work that was completed in the run up to and in Doha was extremely fruitful and worthwhile.  As an organization, we took the lead on a number of key initiatives aiming to catalyse the health and climate movement, boosting its profile at these talks and creating opportunities to support people that have been working in this sector for years, as well as to train and engage those that are new to it.


Want to learn more about the UN process?
Work your way through these online training modules produced by UKYCC and you'll be a climate policy pro in no time.


Key facts and figures on climate change and health:

(see also ou summary page).  The current lack of action on climate change is exacerbating the health problems associated with climate change, and failing to capitalise on potentially significant health ‘co-benefits’ from reducing many of the more short-term and direct negative health effects of a carbon-intensive global economy.

- Global warming that has occurred since the 1970s and just 6 categories of direct health impacts are estimated to have caused over 140, 000 excess deaths annually by the year 2004 (WHO figures).
- The direct damage costs to health (i.e. excluding costs in strongly health-determining sectors such as agriculture and water and sanitation), is estimated to be between US$ 2-4 billion/year by 2030.
- Many of the major killers such as diarrhoeal diseases, malnutrition, malaria and dengue are highly climate-sensitive and are expected to dramatically worsen as the climate changes, spreading to areas where prevalence presently in low (WHO, 2012).
In years to come, indirect impacts such as food insecurity, migration and conflict may be some of the greatest impacts on health unless both mitigation and adaptation are taken significantly more seriously.


Blogs written by the Healthy Planet UK team during and after COP18:

-          Introductory blog at the start of COP18: ‘A second look at Climate Change’ – Jonny Elliott
-          Article on the links between climate change, women’s rights and the unmet need for family planning on rtcc.org – Izzy Braithwaite
-          An overview of past themes and future directions in Climate Change and Health advocacy, written after the panel discussion organised at LSHTM by Shuo Zhang
-          Jonny’s second blog ‘Stand by Me’ on climate and health, inequalities and resilience and the need for a new approach
-          A blog by Jonny on climate-induced migration and health and how it fits into (or doesn’t fit into) the COP process. (see also this piece on the same subject in relation to loss and damage).


Key resources about the UNFCCC, COP18 and related issues:
A summary of COP18’s key outcomes in the text by UNEP can be found here
-          Ban-Ki Moon – ‘the window of opportunity is closing but there’s still time’
http://climatechange-tv.rtcc.org/cop18-ban-ki-moon-warns-window-of-opportunity-on-climate-change-is-closing/
-          Christiana Figueres (executive secretary of the UNFCCC) on why a deal is possible but achieving one will be complex http://www.rtcc.org/figueres-time-to-ditch-the-politics-of-blame-and-size-opportunity/
-          A summary of the responses of important NGO players in the climate movement - http://adoptanegotiator.org/2012/12/11/the-cop18-outcome-through-the-eyes-of-our-partners/
-          Mohammed Mukhier of the Red Cross and Red Crescent Societies on health impacts in the global South http://climatechange-tv.rtcc.org/cop18-ban-ki-moon-warns-window-of-opportunity-on-climate-change-is-closing/
-          ‘Sing for the Climate’ – and effort of around 80,000 people in total http://www.youtube.com/watch?feature=player_embedded&v=aMgfgYGb5cc  (explained further at http://www.rtcc.org/why-its-time-to-sing-for-the-climate/)
-          Connie Hedegaard on why COP18 was a success http://www.guardian.co.uk/environment/2012/dec/14/doha-climate-conference-success
-          Rishard Black on advocacy by least developed countries and small island states for a strong deal http://www.bbc.co.uk/news/mobile/science-environment-15992519
-          On the psychology of climate change and the need for focus http://www.guardian.co.uk/sustainable-business/blog/2013-prediction-climate-change-cop18
-          On loss and damage: http://www.guardian.co.uk/environment/2012/dec/08/doha-climate-change-deal-nations
-          On the prospects for leadership on climate by China and the US http://www.guardian.co.uk/environment/2012/dec/12/china-us-global-climate-deal 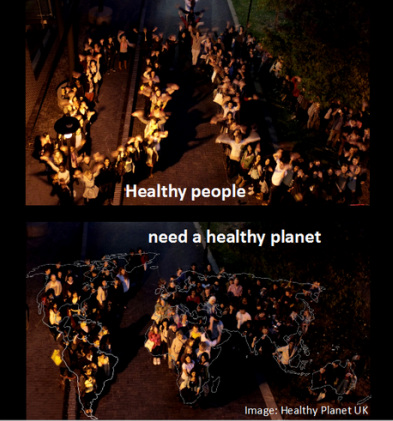 Image from a Healthy Planet/Medsin campaign stunt in Warwick University prior to COP18. 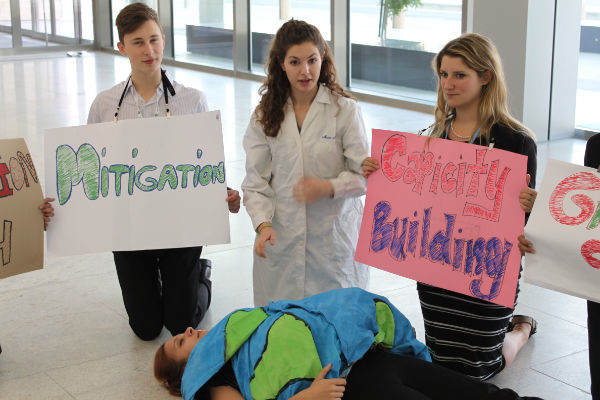 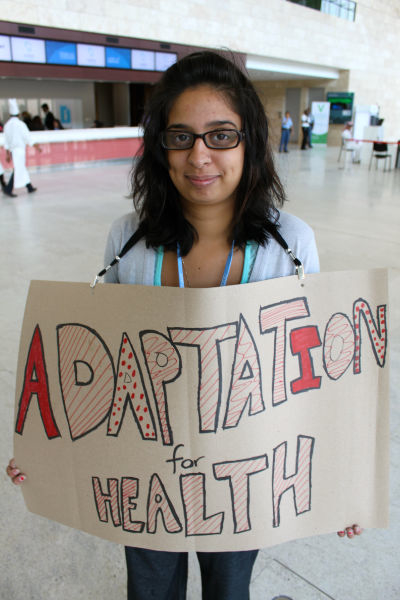 Our Prezi to explain a bit about COP18 in the context of climate change & health: