The health burden of a high-carbon society

In March 2015, atmospheric CO2 concentrations broke the threshold of 400 parts per million (ppm). This came more than three decades after the internationally-recognised 'safe' threshold of 350ppm had first been broken, following an explosion in global net CO2 emissions. The mechanisms through which this expansion in fossil fuel use affects human health are diverse (summarised in the image from the 2015 Lancet commission on climate change below), but the impacts are undeniable. The WHO estimates that from 2030-2050, climate change will increase premature mortality by 250,000 deaths per year - a figure they acknowledge is likely to be an underestimate, only incorporating additional deaths from diarrhoeal disease, malaria, malnutrition and extreme weather events. More comprehensive estimates put this attributable mortality figure at 400,000 deaths per year already. And that is ignoring the other health costs of fossil fuel use, from ocean acidification and air pollution to the mental and physical health costs of extraction-induced environmental degradation.

If the most obvious measure of a changing climate is the increase in average temperatures, then the most straightforward health impact of those changes come directly from the temperature increase. Rising temperatures affect human health both chronically - with heat-related hospital admissions predicted to more than double in 2021-50 relative to 1981-2010 due to climate change - and acutely from heat waves like that in India in the summer of 2015, which claimed over 2000 lives. Rising temperatures cause worse health through disrupting the ability of those with already-impaired temperature homeostasis (e.g. older populations, infants, and those living with some chronic diseases) to maintain a constant body temperature, and through exacerbating air pollution through landscape fires - the 2010 Russian heatwave is thought to have caused an additional 11,000 premature deaths from increased particulate air pollution as a result of the widespread forest fires in the Moscow region. With climate change, those record temperatures in Russia are predicted to become the new normal. Heat-related morbidity is likely to be increased by social factors including increasing urbanisation and land use change.

Climate change is also disrupting plant ecosystems vital for human life. Crop failures due to drought and temperature increase will increase undernutrition - leading to a predicted 95,000 more childhood deaths per year through the 2030-50 period - as well as desertifying previously arable land, removing some sources of food altogether. What crops are grown are also becoming less nutritious, as elevated atmospheric CO2 lowers the content of many important nutrients such as zinc in staple crops such as wheat, rice and soya. 138 million more people will be at risk of zinc deficiency by 2050 as a result of anthropogenic CO2 emissions, the majority of those in Africa and South Asia.

The last group of climate health risks is harder to quantify, but potentially the most severe. Resource depletion, land loss and land use change, extreme weather events, altered working environments, and many more climate-sensitive factors besides have the capacity to disrupt the human and social systems that support today's complex, globalised societies, with a potentially catastrophic health cost.
A lot of the evidence for longer-term mental health impacts of environmental change come from research performed during the Australasian drought of the late 2000s. While not univocal, most researchers discovered that incidence of depression, anxiety and stress-related illness rose and general emotional wellbeing fell amongst affected populations, particularly in rural areas. While some of this was attributed to the importance of farming to the rural economy and consequent effects of drought on economic wellbeing, these effects were not only found amongst farming communities. For some (perhaps particularly in Indigenous communities) the disruption of the landscape that they lived in and upon as directly causing the distress. This phenomenon led one Australian psychiatrist to coin the term solastalgia - "distress that is produced by environmental change impacting on people while they are directly connected to their home environment." Such effects are produced not only by open environmental change, but also the local impacts of fossil fuel dependence - the phenomenon was first noted in response to the environmental destruction wrought by opencast mining in New South Wales.

Health burden of air pollution from coal power in the EU (Source: HEAL)
While climate change might be the most-publicised threat arising from a carbon-dependent society, fossil fuel combustion produces a range of other pollutants that, if anything, have an even greater health cost. Particulate air pollution caused over 7 million premature deaths in 2012 - that's 1 in every 8 deaths. That figure includes both ambient air pollution - whose major source is fossil fuel combustion, but also includes landscape fires, desert winds, and other processes - and indoor air pollution, from biomass and coal burning for heat and cooking without adequate ventilation; the morbidity and mortality split is about 50/50. While the majority of these deaths are in rapidly-industrialising nations such as China and India (according to the 2010 Global Burden of DIsease report, ambient air pollution cost Indian people 17.7 million healthy years of life), air pollution is a major health threat across the world. Ambient air pollution causes 29,000 premature deaths every year in the UK, while the Health and Environmental Alliance estimates that air pollution from coal energy generation in the EU alone causes health impacts with a total cost to EU health systems of over 42bn euros per year.

Air pollution has a wide range of impacts on health. Most prominently, it is a major cause of both cardiovascular and respiratory disease, but it has also been linked to pathologies from inflammatory bowel disease to Alzheimer's. Particulate air pollution is a recognised group 1 (highest-risk) carcinogen, greatly increasing risk of lung cancers and also contributing to bladder cancers. WHO global health observatory data breaks down air pollution-related mortality by major cause and geographical region, highlighting the impacts of ambient air pollution from stroke in adults to acute respiratory infections in young children - explore the data here.

Most health students will be familiar with the carbonic anhydrase reaction - the interconversion of CO2 and water into carbonic acid (rapidly dissociating into bicarbonate and protons). It orchestrates the buffer system that serves to maintain a physiological pH within humans. The same reaction occurs in our atmosphere and oceans to maintain a chemical equilibrium. Increasing CO2 concentrations, therefore, mean increasing rates of carbonic acid formation - and ocean acidification. This may not seem to be of direct concern for humans (living on land as we do), until one remembers that many communities are partly or wholly dependent upon oceanic ecosystems for food and economic wellbeing. Much like an acidotic patient, these ecosystems are starting to collapse as they move outside their stable pH zone. Populations of certain species like molluscs and Antarctic krill are already declining, with likely knock-on effects for their many predators. These include humans, who in some areas are already feeling the costs of ocean acidification; for example, the Pacific Northwest oyster industry has been hit by this process, costing nearly $110 million and jeopardising 3200 jobs.

And the intensively-cultured, low-variation environments of single-species factory farms provide ideal incubators for infectious diseases to spread, mutate, and reassort - the two most recent cases of antigenic shift in influenza - 'swine' and 'avian' flu - have both originated in intensively-reared animals. To combat the bacterial infections that run rampant in industrial animal farming as a result of this process, farmers turn to increasingly higher usage of prophylactic antibiotics, a major driver of antimicrobial resistance worldwide. There is epidemiological evidence, by contrast, that higher biodiversity is protective against a range of infectious diseases, with malaria and respiratory and diarrhoeal disease incidence negatively correlated with environmental protections in the Brazilian Amazon. 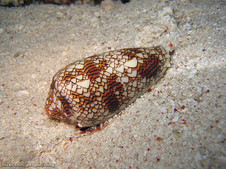 A cone snail. Photo: Richard Ling
While we're not massively keen on the coldly economistic terminology, another way to understand the importance of biodiversity for human health is in terms of 'ecosystems services' - the functions diverse ecologies play in maintaining public goods vital for human societies. Forest and wetlands systems, for example, are central to the provision of clean, fresh water in many regions of the world, plant species serving to filter and purify water, while woodlands stabilise and reduce the saturation of soil on steep surfaces, preventing landslides and flooding. Plant life plays a similarly important role in regulating air pollution; not only do plants form one of the most important carbon sinks worldwide, they also reduce other gaseous (e.g. SO2) and particulate pollutants, with measurable health benefits. Biodiverse ecologies are vital for research, too. More than half of all drugs registered with the US FDA in the 1981-2010 period were derived from natural sources, the figure for new antimicrobials being even higher - as much as 80%. But human activity is threatening these natural reservoirs of pharmaceutical innovation. Deforestation in the Amazon threatens  the extinction of the tree frog species whose toxins underpin our understanding of local anaesthetic and muscular relaxant agents still in use today. And climate change and ocean acidification are destroying barrier reefs, and with them the cone snail species (pictured) whose potent toxin is being used to develop new painkillers, while destroying the Arctic habitat of polar bears will deny us the chance of understanding how they manage to avoid renal failure, diabetes and osteoporosis in circumstances that would cause these conditions in other mammals like us.

Health benefits of a changing climate?

Some commentators suggest that, while climate change is happening and due to human causes, we need not worry too much about it because it will in fact have many beneficial impacts. Some of those suggested relate to health; fewer cold-related deaths and higher crop yields in temperate zones are the ones most frequently cited. Without going into this topic in too much detail, it is important to acknowledge that some regions, in certain specific ways, may see some health benefits from the changes our climate is facing. However, these are likely to be smaller in magnitude than often suggested, and certainly will be far outweighed by potential damages - either to different aspects of health, or in different geographical regions. On crop yields, best simulation evidence suggests that, while there may be a short-term boost to yields in some temperate zones in the earlier part of the 21st century, this will be more than cancelled out by reductions elsewhere, and even temperate zone yields will drop in the later 21st century without significant mitigation and adaptation. As for cold weather, the bulk of winter deaths in temperate zones - due to cardiovascular disease - show little to no temperature correlation, while overall mortality does not appear to reduce significantly with temperature increase. This paradoxical conclusion may be because winter mortality is more closely related to indoor living temperature than conditions outside - and thus interventions to improve energy efficiency and fuel poverty (see our page on the health cobenefits of mitigation) are better strategies for health promotion that waiting for the world to warm!

Issues in global health and the environment

As we argue above, environmental health is an important factor in almost all global health issues facing the world today. Are you interested in a particular health and development topic, and want to know more about how global environmental change is affecting it, and the cobenefits of environmental protection? You'll find more information on our special topic pages, covering:

This work is licensed under a Creative Commons Attribution-ShareAlike 4.0 International License
.