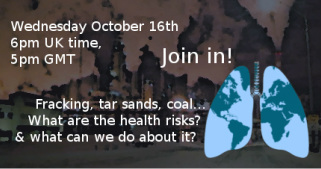 We invited people to join us online to discuss how coal and unconventional fossil fuels - like fracking and Tar Sands - can affect health.  We discussed both direct effects, like air pollution, water contamination, spills, and indirect ones - such as through the health impacts of climate change and by exacerbating water scarcity.

Check out the full Storify at http://storify.com/healthyplanetuk/health-impacts-of-dirtyenergy/.

Other stories from the event, arranged by theme:

This linked in with the Global Month of Action on Energy and the Keep Tar Sands out of Europe campaigns, but more than anything was a response to the immense - yet often invisible - impact that polluting fossil fuels have on health around the world.  As a group, we decided to organise the discussion because we felt that health effects of our energy policy, subsidies etc are often entirely overlooked, and also that general awareness about them is relatively low and sometimes not well reported

Around the world, outdoor air pollution in cities alone was estimated by the WHO to lead to 1.34 million premature deaths in 2008 - from conditions like asthma, COPD, heart disease, stroke and acute respiratory infections.  That figure will be higher still now due to rapid urbanisation, industrialisation and population growth in much of the world and our continuing dependence on fossil fuels. 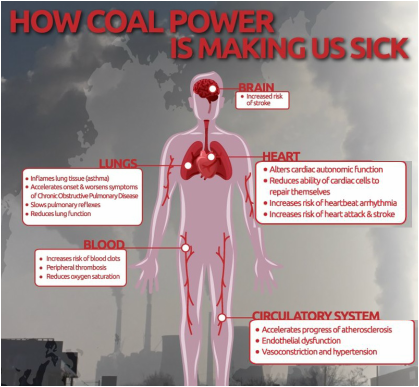 Other resources to find out more...


If you want to learn a bit more before (or after) the twitter event, check out HEAL's report, 'Coal's Unpaid Health Bill' (see infographic, left and summary here) which found that European Union-wide impacts of burning coal amount to more
than 18,200 premature deaths, about 8,500 new cases of chronic bronchitis, and over 4 million lost working days each year.


We also recommend this overview by Paul Wilkinson et al (2007) in the Lancet on the health effects and injustices associated with energy production and discrepancies in access to energy worldwide (you'll need to register to access it, sorry).

You might also want to have a watch of this great short film, 'The Human Cost of Power' made by the Climate and Health Alliance in Australia, this piece on the health risks associated with fracking.  and this talk by WHO Director General Margaret Chan on the health impacts of climate change - which is how fossil fuels affect health indirectly.

For those looking for a technical introduction to the science of how air pollution from coal and other fossil fuels affect health, this presentation by one of the world's foremost experts goes into a lot of the detail about how scientist know that air pollution causes health problems like asthma, worsens COPD and increases the risks of stroke, blood clots and heart attacks, and also causes premature deaths.
Talking points...

How can you take action?

Please do get in touch with us if you'd like to get involved in advocacy and raising awareness around climate & health - whether at a local level here in the UK, as a partner organisation elsewhere in the world, as a guest blogger... or let us know your other ideas!

Some good organisations (EU, USA or International) to check out, contact or get involved with: 350.org, The Global Call for Climate Action, Global PowerShift, the Global Climate and Health Alliance, the Health and Environment Alliance, Healthcare Without Harm, ClientEarth (UK and Poland)


Top actions for people in the UK:

Slideshow of tweets from the discussion: